Sandy moved into the rest home at HBH Senior Living six months ago. One of the main attractions was that she could bring her dog with her.

“I’d had Piechi, a Chihuahua, for 13 years so it was unthinkable to leave her – she was like family to me.”

Piechi had to undergo a six-week probation period, which she sailed through with flying colours, and Sandy and Piechi were both settling in well to their new life at HBH. Then, a month ago, Piechi fell ill, and Sandy made the heart-breaking decision to have her put down.

Just as Sandy was beginning to think she’d never be able to replace Piechi, Juliette Bell, the Eden Alternative coach at HBH suggested Sandy trial one of her three Chihuahuas, Coco. They got on famously so Juliette and Sandy “sealed the deal” and Coco now has the best of both worlds – two adoring mothers at HBH!

“Coco keeps me busy and we enjoy the company of other residents here. Everyone loves to have a cuddle with Coco!” says Sandy. 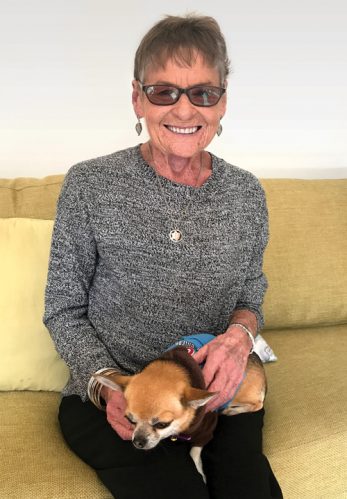