‘Living well, ageing well’ #3: Think yourself back to positive 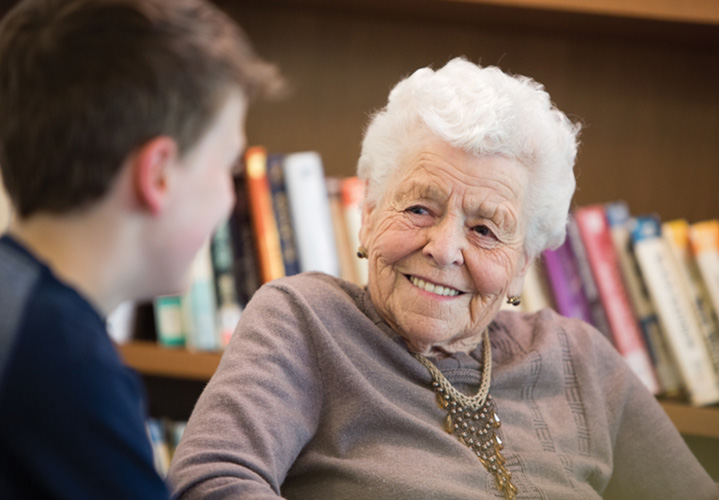 ‘Living well, ageing well’ #3: Think yourself back to positive

A childhood illness meant that Eve Tate has had a lifetime of learning how to be resilient and overcome challenges. It hasn’t held her back – she’s perfected the art of staying positive and knows the importance of staying busy and active.

Growing up in Westport in the South Island, Eve’s young life changed forever when at age 13, she contracted osteomyelitis in her leg. This was before World War II – before penicillin was readily available – so she spent many years in hospital.  She never returned to school, as she wasn’t well enough.

“It was a difficult time,” says Eve. “I had twelve operations, and when I was 16 I had another big operation. I got through it, although I regret that I didn’t have the right education. However, my leg healed and I went on to be able to do the important things for a young lady like dancing and playing tennis.”

Before long, Eve fell in love and was engaged to be married. At that time penicillin became available, which completely cleared her leg. However, tragedy struck again when her fiancé, a flying officer in the air force, was killed in action at Bougainville during December of 1944. Eve was only 19 years old.

“The war was terrible and we mustn’t forget that – it’s important that younger people have an understanding of what it was like. We never want it to happen again.”

“I was at a complete loss and a girlfriend suggested I move to Gisborne and spend time with them. I was employed as a packer at a tobacco factory – it wasn’t the most glamorous job, but I could sit down which helped with my leg. Thankfully I never became a smoker!”

The change proved to be the distraction she needed and Eve soon met her husband-to-be, Les. They married and had three children and eventually they transferred to Sandringham in Auckland.

Eve was a working mother and despite having little education, she found a job in the medical superintendent’s office at Auckland Hospital. “It was a busy time with the three children and a full-time job,” she remembers. “Les used to say ‘you do the inside and I’ll do the outside’ so that is how we shared the household jobs – I’m not sure it would be the same today!”

Eve has had a love of singing all her life and for 20 years sang with the Orpheus Choir. She’s is a prolific reader – “my niece bought me 20 books and I read them all.” She’s also a great believer in the importance of friendship. “As you get older, friends and family become so important – enjoying one another’s company is one of the great joys in life.”

Eve suffers severe back pain but likes to keep herself busy. She plays Scrabble to keep her mind ticking over, reads regularly and used to love painting. One thing that life has taught her is the importance of staying positive. “You have to keep on top of yourself if you’re feeling a bit low. It’s important to think yourself back to being positive – there is always someone worse off and I’ve been pretty fortunate in my life.”