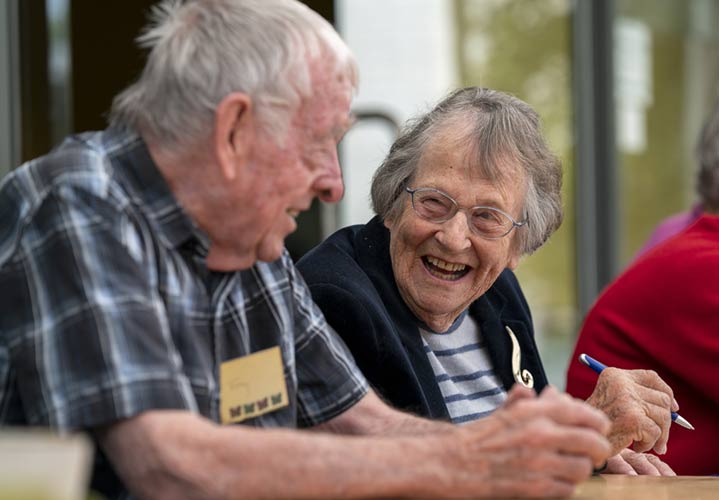 “To keep a lamp burning, we have to keep putting oil in it.” – Mother Teresa

Virtual Villages are a relatively new concept in New Zealand, but in the USA they’ve been around for a long time. HBH Senior Living CEO, Bonnie Robinson, recently attending the Village to Village forum in the USA to discover what trends could be helpful here in New Zealand.

She says one of the key learnings is that virtual villages are flourishing in the US and fulfilling a great need for older people in local communities. “Several themes became apparent at the conference,” she says, “including many interesting services and ideas that we may or might not take up in New Zealand.”

“The themes of meaning and purpose came through very strongly at the conference,” reports Bonnie.

“What was fascinating was that nearly everybody who presented at the conference was a senior. In fact, many of the people running virtual villages in the US are older. That’s because people who are no longer in the workforce still want to use their skills and abilities in some way,” she says. “They’re used to doing meaningful things and they want to keep doing it!

“By getting involved and helping to run their village, they’re not only keeping busy and building friendships, they’re also doing something that’s important and necessary.”

Another key learning is that virtual village organisers need to be very deliberate about creating connections and community. “From experience, other villages have learnt that friendships don’t just happen. So we need to really ensure that our members have other opportunities to connect and develop relationships that go beyond the events we hold.”

Bonnie says that various villages have been trying different ideas to solve this issue. A common one is neighbourhood socials, where members within a small radius come together in someone’s home so that seniors get to know the people living nearby. “That’s certainly something we could look at introducing here if there’s enough interest,” says Bonnie.

Another interesting concept coming through in the US is home sharing, whereby older people who are living on their own share their houses with other seniors. “There was a strong theme of having flatmates of all ages to combat loneliness and help with affordability,” says Bonnie. She says there are similar trends emerging in New Zealand as more people reach retirement without owning their own homes or having significant savings.

In fact, the age of segregating people by age group is potentially coming to an end. “There was a lot of talk about people wanting to continue to have meaningful inter-generational connections,” says Bonnie. For example, one village has experimented with having no age limit. “Many older people don’t want to be cut off from younger people, so how do we facilitate that for people who don’t have families? Shared housing is one way to do this; another is by curating opportunities for seniors to connect with younger people, such as helping out with reading in schools.”

The things that seniors struggle with today in terms of technology may be radically different in the future. “It’s really important to ensure technology is easily accessible to older people, which is why we’re offering SeniorNet classes through Virtual Village East,” says Bonnie. “You’re already missing out if you don’t use technology now, and this will only increase in the future.”

She says there are several exciting new developments in the pipeline, such as GrannyPad, which is similar to an iPad, but specifically designed for seniors. “Once it’s set up, you just click on a photo and it automatically connects you to that person,” says Bonnie. “You don’t even need to look up a phone number – it does everything for you.”

One of the ‘coolest things’ Bonnie discovered at the conference was a group of seniors in one virtual village who have a business as ‘senior tech testers’. “It started it as a friendship/interest group who were testing out technology that they thought might be interesting or useful to village members – computer apps and the like. The group became better known and now they’re being paid by companies to test technology for older people,” she says, “which goes to show you’re never too old to create a new business.”

Bonnie also noted that technology has the potential to change people’s experience of ageing. For example, many of the US villages offer transport, either through volunteers or member-to-member services. While this service is needed right now, says Bonnie, it’s important not to focus too much on this as technology will eventually override this need.

“In the States, there are now several rideshare options available, so the next generations will be completely comfortable using those services. In fact, many younger people no longer own cars or learn to drive – they simply catch a rideshare or public transport,” she points out.

On the plus side, belonging to a virtual village means services are more accessible to members. “One of the US villages has done a deal with Lyft, a driving service offering door-to-door services for seniors – even helping customers in and out of the car.”

Bonnie says that having around 70 engaged members in a village seems to be the norm. “Some people believe that this is the right size and that rather than grow more members, we should grow more villages,” she says.

Locally, Virtual Village East has shown a good level of engagement since it was launched earlier this year. “We’ve taken a slightly different route than the American model. So far, around 200 local seniors have connected with Virtual Village East at some point and that’s growing.”

Virtual Village East has run two public forums and several events so far, including monthly ‘coffee and catch-up’ mornings, all of which are proving popular with older people in the East Auckland community. “Our Summer Series is getting a lot of interest, especially our cooking and exercise classes. The engagement seems to be there and it’s still early days,” Bonnie reports. “This demonstrates that older people are wanting opportunities for connection and to build friendships.”

So what’s in store for Virtual Village East?

How will the trends Bonnie has highlighted affect us here in New Zealand? “We’re working through that,” she says. “We do need to think about technology and how we support older people to use it, so they don’t miss out on the benefits of keeping connected with loved ones and their community,” says Bonnie.

“We also need to think ahead as we develop the village offering here – and how we can harness technology to make life better for our members. For example, do we spend a lot of time creating member-to-member transport services, or offer our members a discount on rideshare services? What’s going to be the place of technology to support people in our village?

What we do know is that any new trends we take on board will have a focus on creating meaning, purpose and connections for our members – because that’s what Virtual Village East is here to do.”