A lot of love goes into HBH’s laundry service 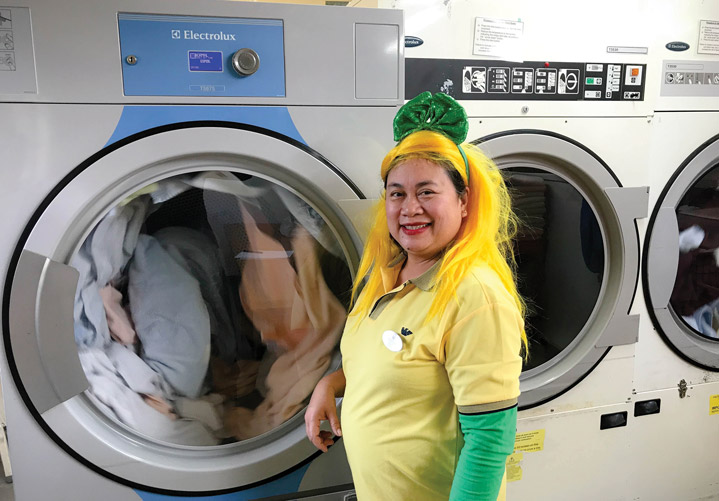 A lot of love goes into HBH’s laundry service

In this occasional series, we look at different jobs within HBH and what they involve. This month, we focus on our friendly, hard-working laundry staff – Marie Palma, Colleen Hill and Lilian Hetaraka.

Every morning, the team of three works to a roster, collecting washing from the four communities at HBH Senior Living, before sorting, washing and folding it to return back to them on the same day.

It’s a busy place – the machines start running at 7am until 3pm each day – meaning they’re putting through nearly 300 loads of washing every week!

“It’s hard work, but we’re busy and it’s satisfying to be so productive,” says Colleen, who has worked at HBH for eight years. “I like the fast pace – the day flies by – and when I go home to my own washing, it’s a breeze!”

“We do a bleach wash for the sheets, towels and other linen, and put the clothes through in a separate wash. We don’t iron, but we do take care how we fold and dry the clothes so they go back well presented. We don’t want to see our residents out and about in crumpled clothing,” says Colleen.

HBH caregivers carefully label the clothes so that each item can be returned to the correct resident. “Often the caregivers label the garments at night when things are not quite so busy and there’ll be garments newly labelled for us in the morning,” says Colleen.

Marie tells us that when she started, she thought she’d give it three months. Five years later she’s still enjoying it and says it’s because the residents really appreciate what they do. And it’s no wonder, when you see the effort they put in to ensure everything is “just right” for the residents.