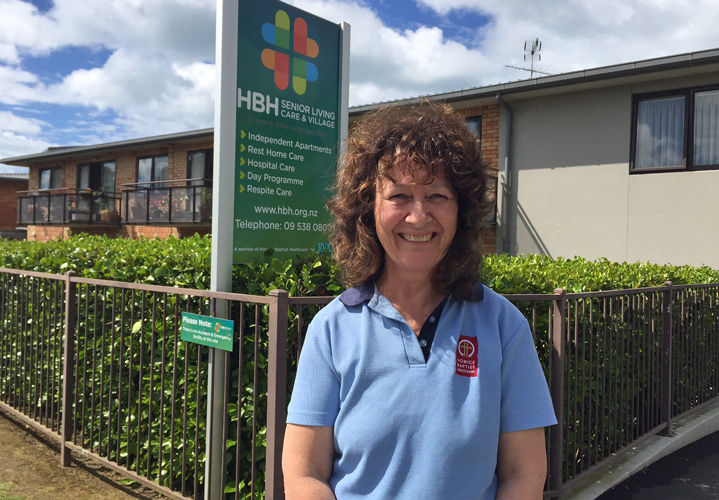 Hillary Payne can never forget 1977. It was the year Star Wars hit the screens worldwide and Apple launched its first personal computer. But the then 16 year old was celebrating a more important landmark. “I had got my first job as a kitchen hand at the Howick Baptist Home and Hospital (now HBH Senior Living) which had just opened in my neighbourhood,” she says. “To be able to work in the big new building was hugely exciting.”

A few weeks after she joined, Hillary joined the rest home as a care giver, a role in which she has continued to this day. “I have enjoyed every moment,” she says. “With so many different types of people around you, no two days are the same.”

Flexible work hours mattered too. “Looking after five children became a lot easier because I was able to choose my shifts.”

It’s also about teamwork, she adds. “I work with professional, skilled staff who play a role that is vital to people’s lives within the community. It helps when you have supportive colleagues and management who are approachable when the need arises.”

No person can last 40 years in a job if they don’t have the passion for what they do, and Hillary has loads of that. But to do the type of work that she does, one has to be a rather special person. “You have to have compassion,” she explains. “People who come to a rest home used to lead normal lives but because of an affliction or trauma, they require your care for such day to day things as putting on clothes or showering. You can’t be detached from their condition. In fact, you often become attached to the people under your care and even with their families.”

Hillary points out that because of the government’s policy changes, people in the community are now offered aged care at home. Or they move into HBH’s apartments, which offer independent living with care on hand. So by the time many residents arrive at the rest home or hospital, they need a higher level of care. “Some older people may require oodles of your patience,” she says. “But when you are able to establish a rapport with them, the personal satisfaction you feel is one of life’s greatest rewards.”

Last month, as HBH Senior Living celebrated its 40th birthday, her colleagues organised a quiet breakfast to celebrate Hillary’s four decades of service. “I didn’t want a big party,” she explains. “To me it was just another day at work. Plus, I had finished my night shift so I wanted to go home, get some rest and get ready for the next shift.”

Clearly, people like Hillary are the real heroes in our community. Here’s wishing her many more such anniversaries.

Thank you to the Eastern Courier.