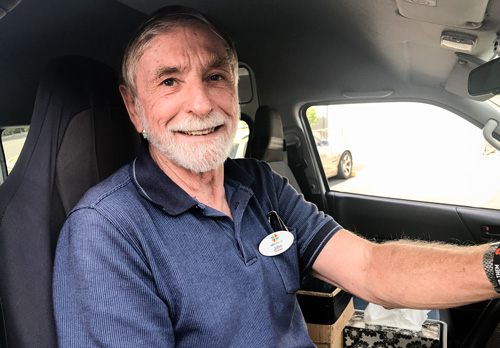 John McKillop is one of our wonderful volunteers at HBH Senior Living. Initially he volunteered for a few hours a week driving residents in our mini van – now he helps out for around 10 hours a week!

John enjoyed a great career as an accountant, but he was looking for ‘what next?’ So he started volunteering with Riding for the Disabled. He’s says he’s “no horse rider” but he thoroughly enjoyed working with the organisation. He was a horse leader for eight years – which meant he was leading a horse carrying a disabled person (usually a child) with two walkers on either side for support.

Unfortunately, John broke his heel after a time, so it became difficult to continue with this. His next stint at helping others was as a volunteer DJ at Howick Village Radio (now East FM). He did this twice a week and introduced a 5 to 6pm drive time session in which he played well-liked classics. The show became popular and one John enjoyed very much.

Around the same time John also became involved in Crime Watch, which he continues with today. At Crime Watch John assists the police by going on local patrol, keeping an eye on empty properties and looking for stolen cars.

He started volunteering with HBH Senior Living two years ago after seeing an ad in the local paper, following the withdrawal of the Courtesy Coach service that had been provided at the Manukau Super clinic. “HBH is an extremely caring organisation that does a great job at making life interesting and fulfilling for residents. Everyone seems very happy to be here – from the residents to the staff to the volunteers.”

“Each week the residents jump in the mini van and I take them on an outing. I used to ask them if there was anywhere they’d like to go but they prefer it to be a surprise. We’ve been up to One Tree Hill, the top of Mount Eden, out to the Te Atatu peninsula, you name it.”

John really enjoys his role and finds volunteering very rewarding. “It’s lovely to see people getting enjoyment from what you do. It’s very refreshing and I can highly recommend it. I’ve passed on the bug to a few of my friends, who are now as busy as I am!”